Rietveld built the Dutch pavilion in 1953-1954 on the Biennale grounds in Venice, together with J.B. van Grunsven and H. Schröder. The commission was given by the Ministry of Arts and Sciences.

The building has a floor plan of 16 by 16 meters and in its center there is a lower part. The space is lit by windows above the lower part and the light is softened by wooden shutters. The design is of an ingenious simplicity. 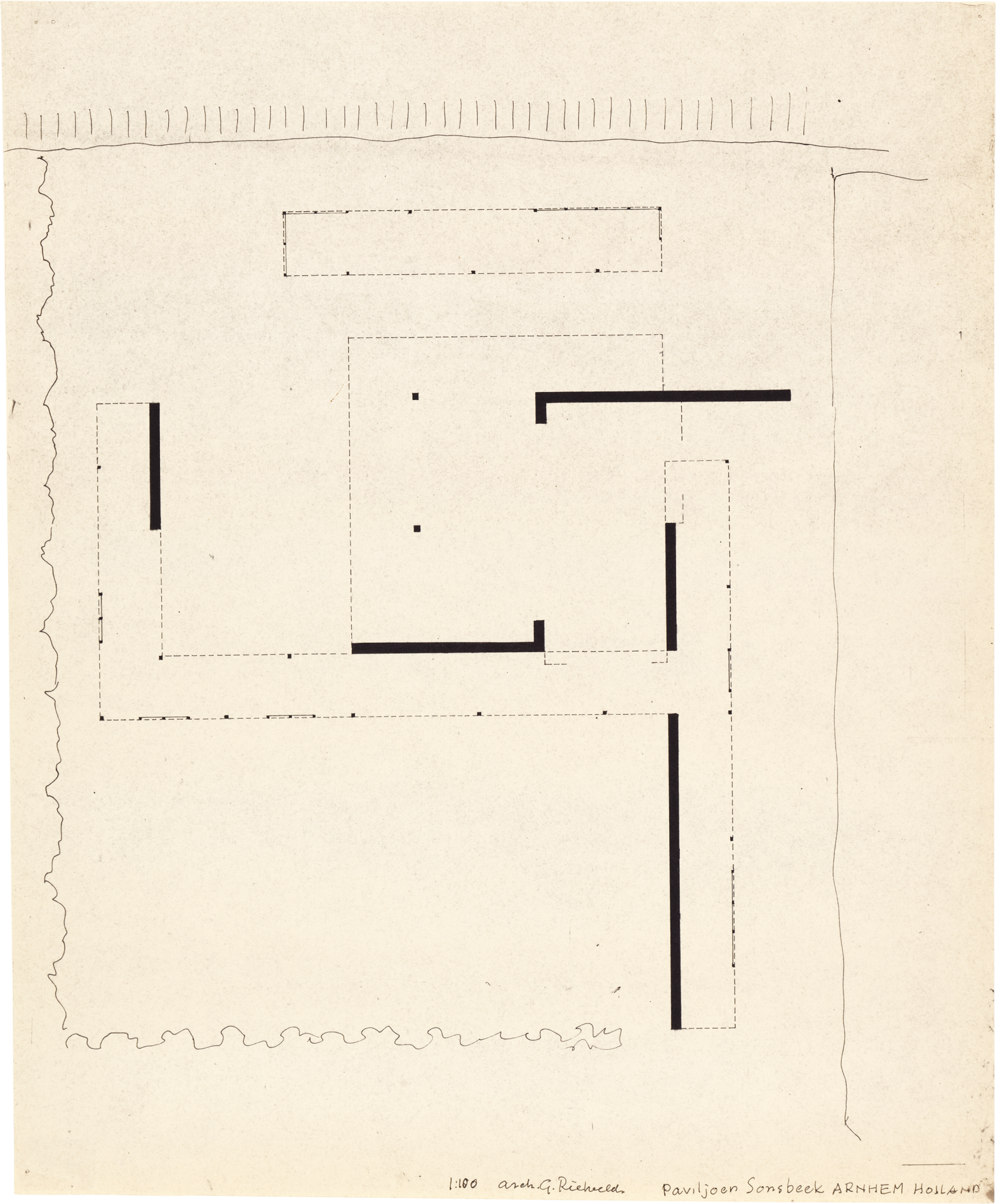 The Sonsbeek Pavilion (1955) is a building with hardly any spatial boundaries as the inside and outside merge into one another. Rietveld described: ‘Sonsbeek Pavilion, a sculpture pavilion in the Sonsbeek garden in Arnhem. This was intended as a temporary building. And I used also bricks that are generally used in housing construction as partitions, but I tilted them. The holes that have constructive intentions in those concrete slabs, I brought them forward precisely to get a nice porous surface that is not too hard in nature and yes, also to get a little openness. You shouldn’t think about something like that for long. I made this model on the train when I had a conversation with the client. I happened to have a pair of scissors and a piece of cardboard with me. At home I immediately started to work on it further. I had a lot of fun doing that. It really highlighted the sculptures. This was a piece of work I called open space art.’

After the exhibition the pavilion was unfortunately demolished. In 1964 a group of colleagues and friends conceived the plan to rebuild it in the Kröller-Müller sculpture park, as a tribute to Rietveld. He was allowed to choose the spot himself, but shortly after he passed away, so that he could no longer witness the rebuilding. 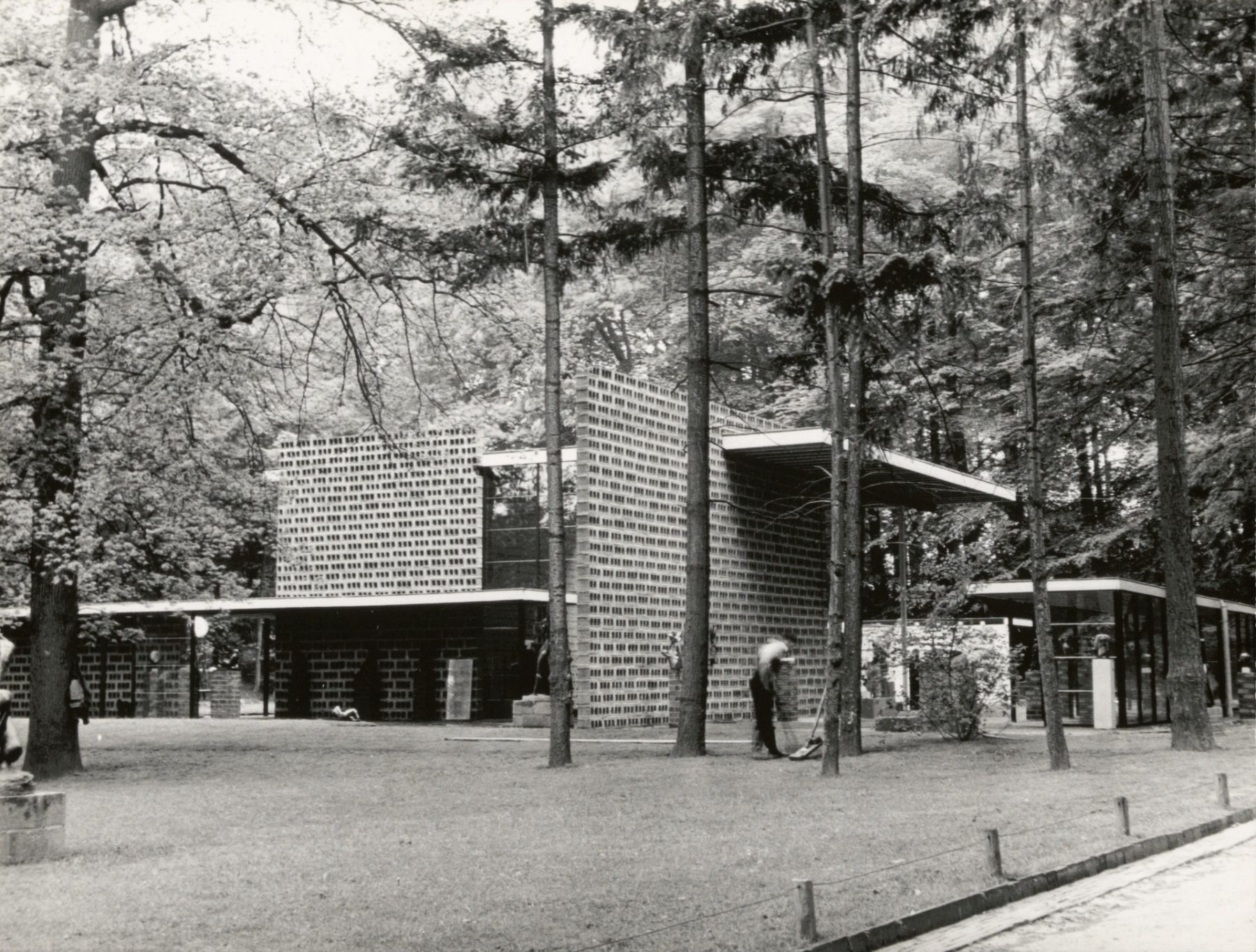 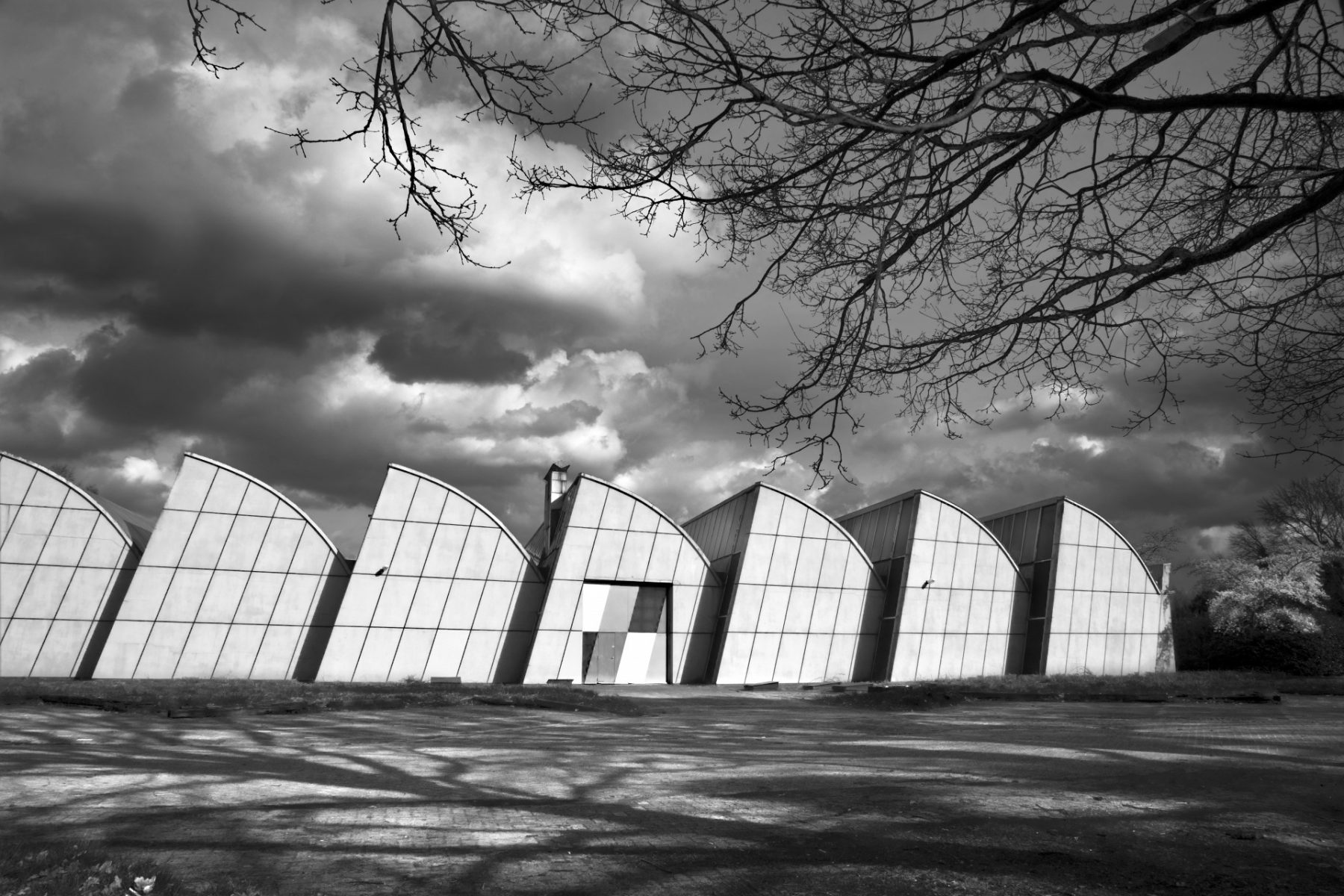 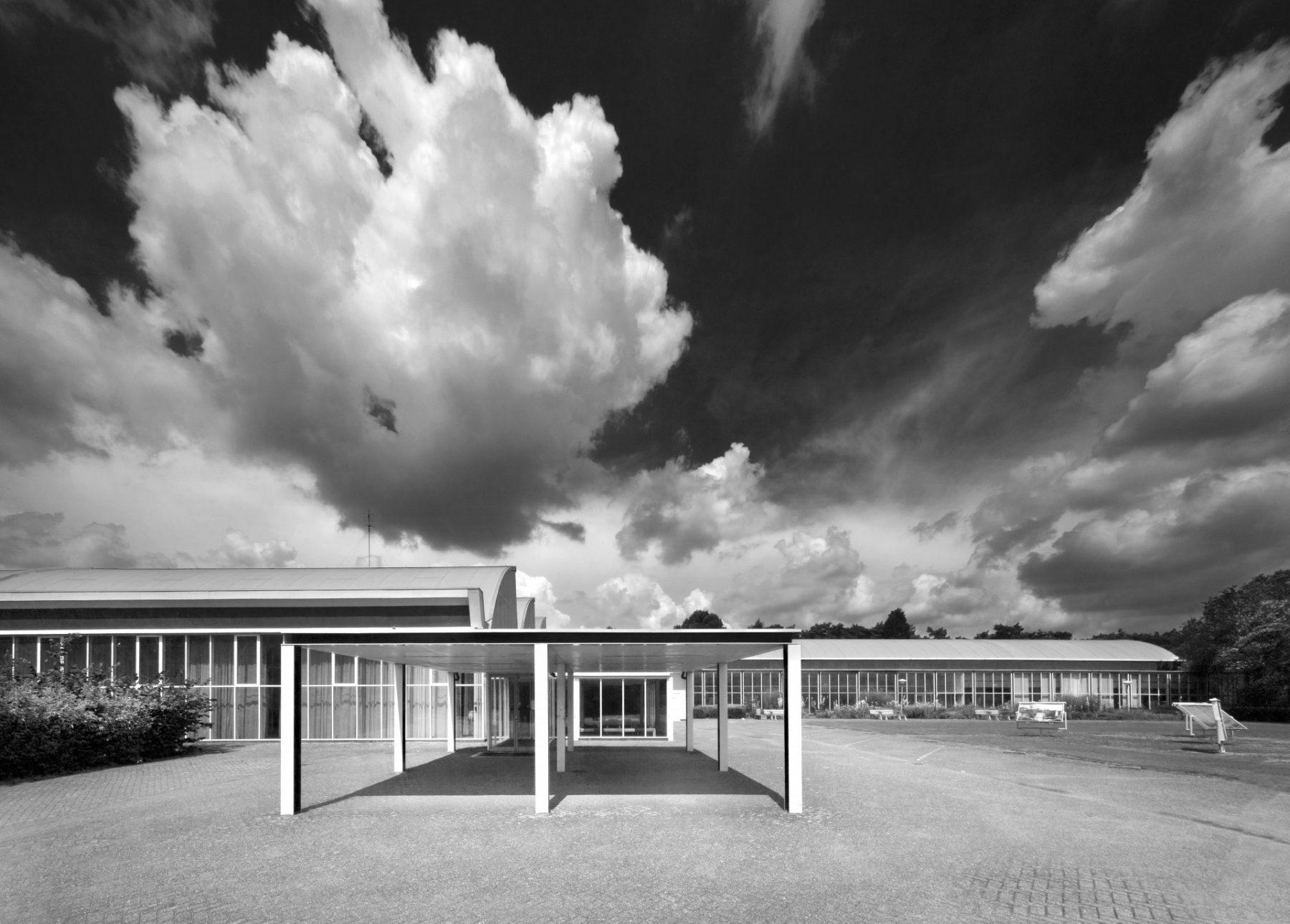 De Ploeg Factory in Bergeijk (1956-1958), is a large complex with garden/park construction by Mien Ruys. Rietveld worked with engineer G. Beltman and the management of De Ploeg and they went on a study trip together to Switzerland and Italy to gain knowledge of modern factory construction. The factory was given a shell roof, with which a large space could be spanned with relatively few columns. 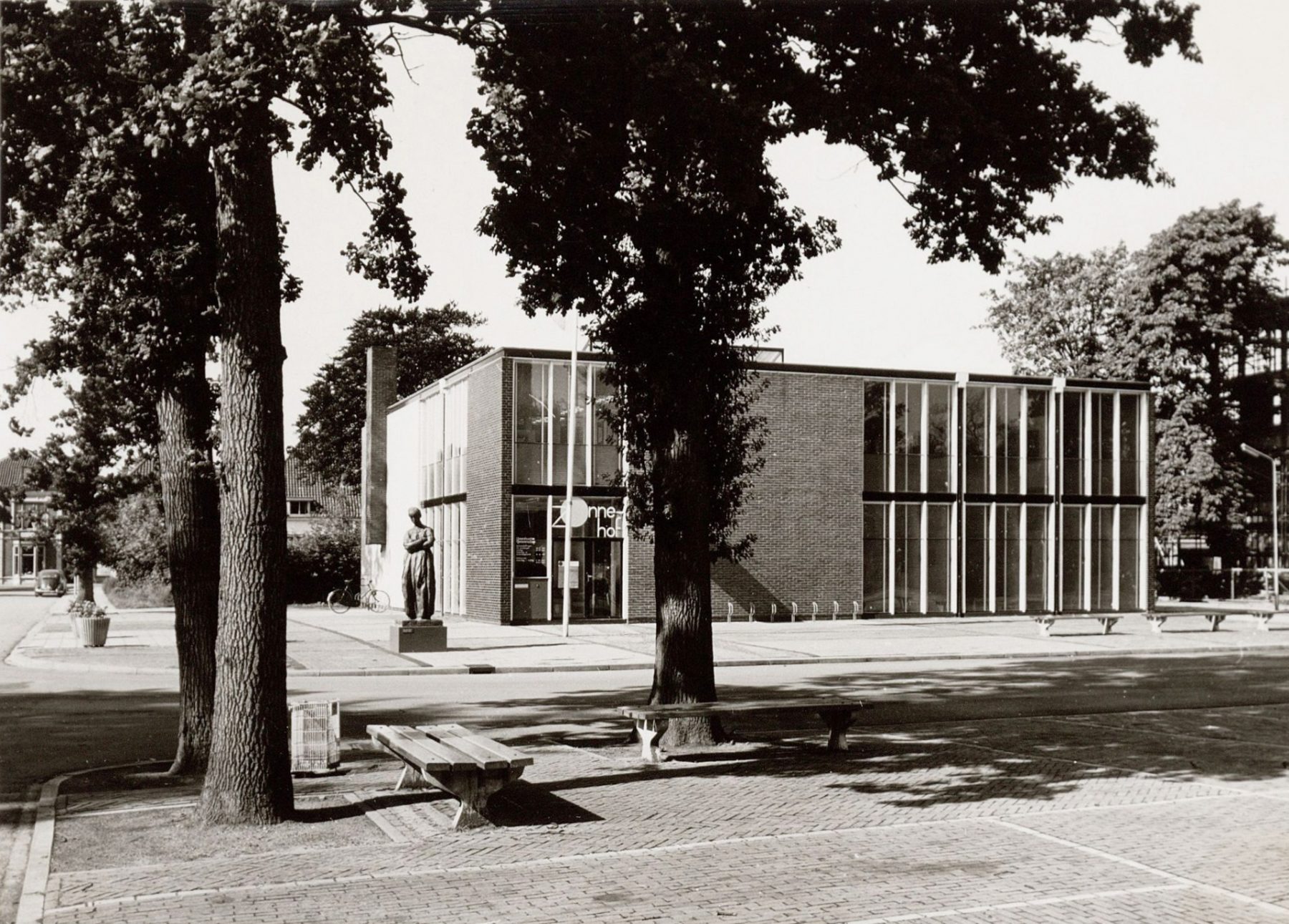 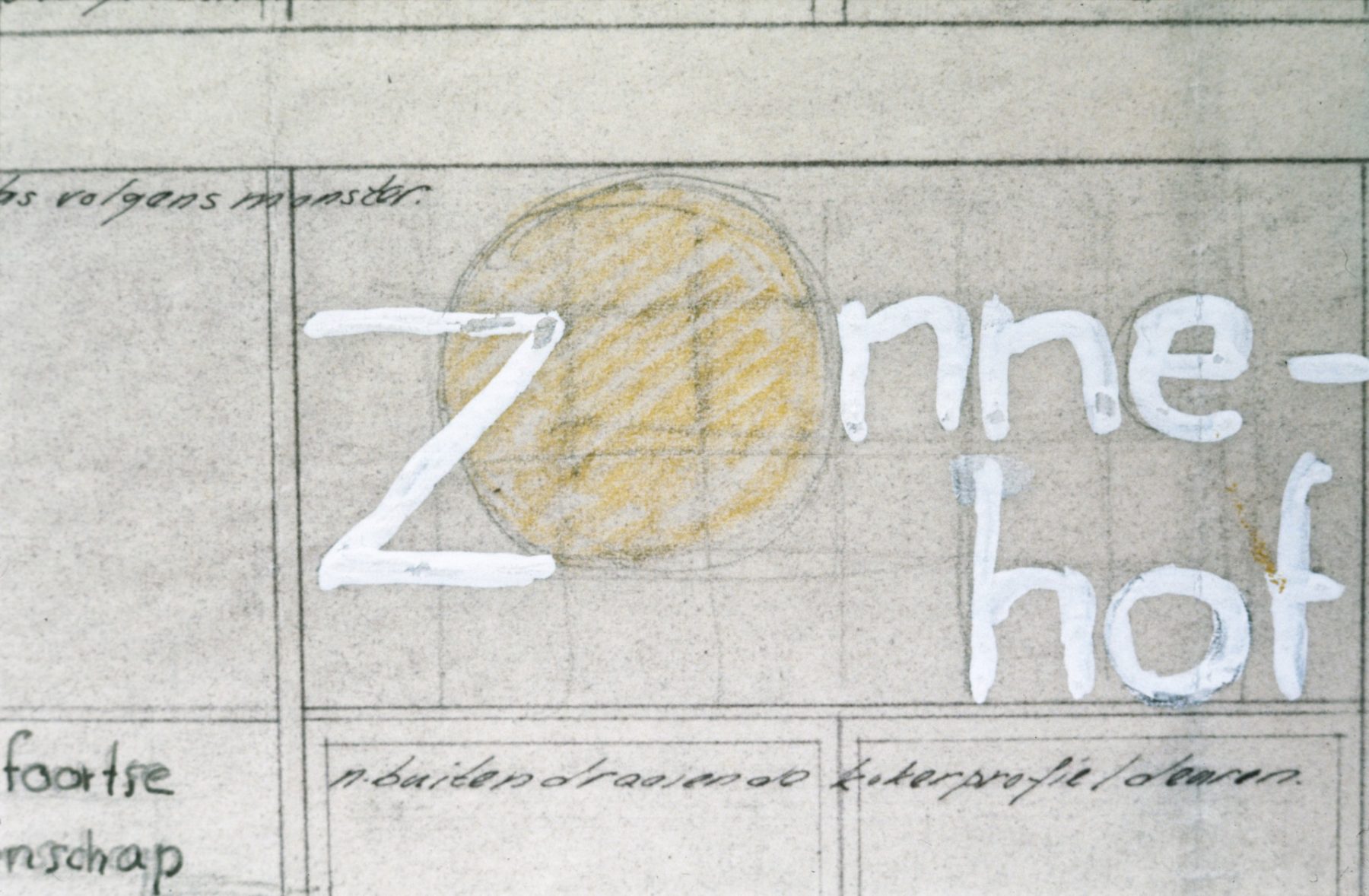 The exhibition building the Zonnehof (1958-1959) in Amersfoort was commissioned by the municipality of Amersfoort. It is based on a fixed unit of measurement of three meters, both horizontally and vertically. The facades consist of alternating glass surfaces and brickwork in white or blue glazed bricks. The three meter wide glass facades are divided into three strips, each one meter wide.

This unit of measurement has also been continued in the paving around the pavilion, bringing harmony to the entire spatial composition. The most important starting point in the design is the incidence of light. The light enters through saw-tooth roofs with slats underneath and through the large glass facades on the side. Aldo van Eyck said about this design: ‘In the Zonnehof Rietveld creates space, not so much by limiting but by depicting the light.’

The building has an open gallery as a floor. To hang works of art, 6020 hooks have been applied to the walls in a pattern specially determined by Rietveld (80 per m2). Rietveld also designed the fluorescent lighting, which accentuates the modular unit. The evening before completion Rietveld designed the logo and lettering for the Zonnehof and had them applied the next day to the glass panel above the entrance. 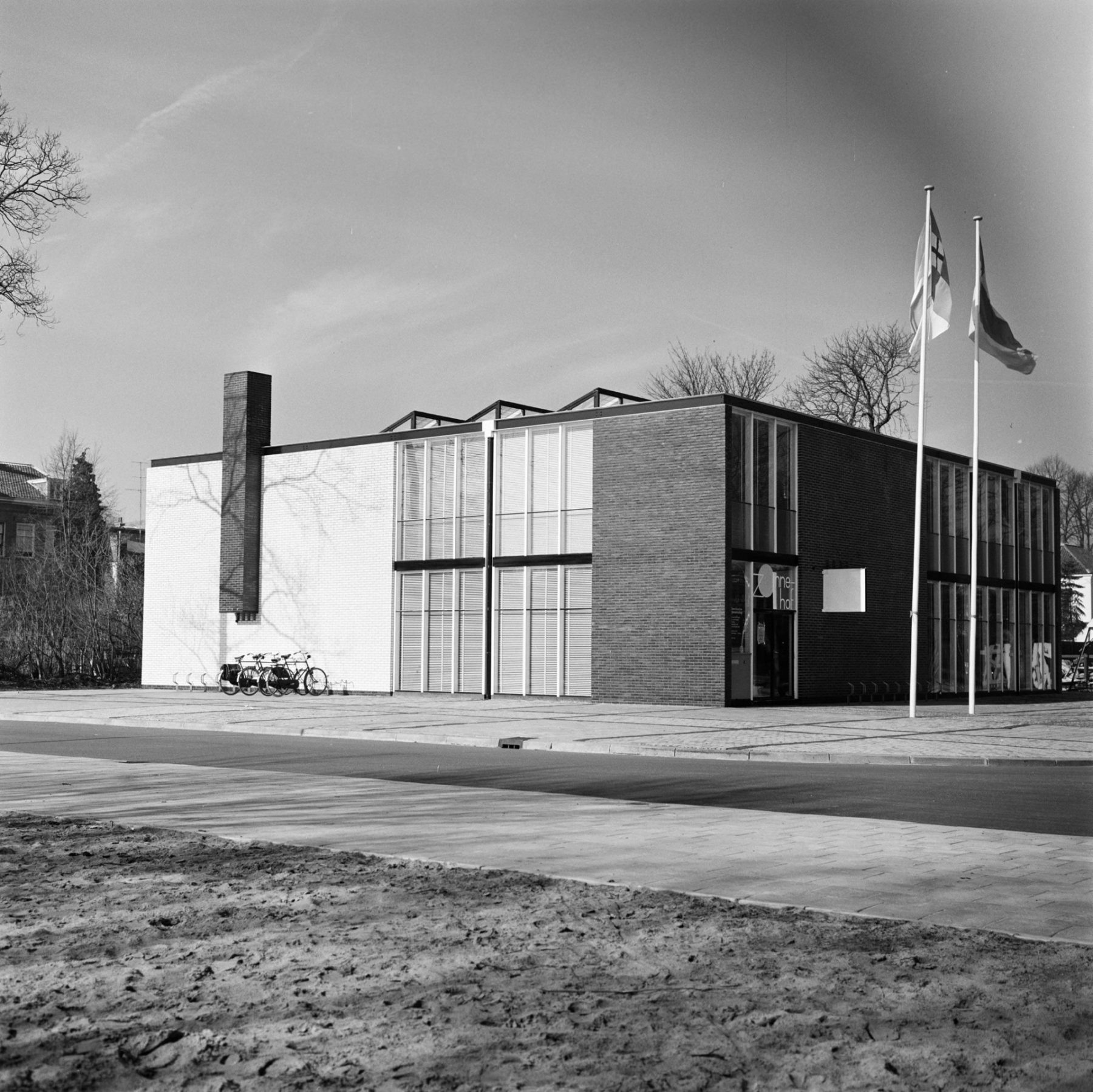 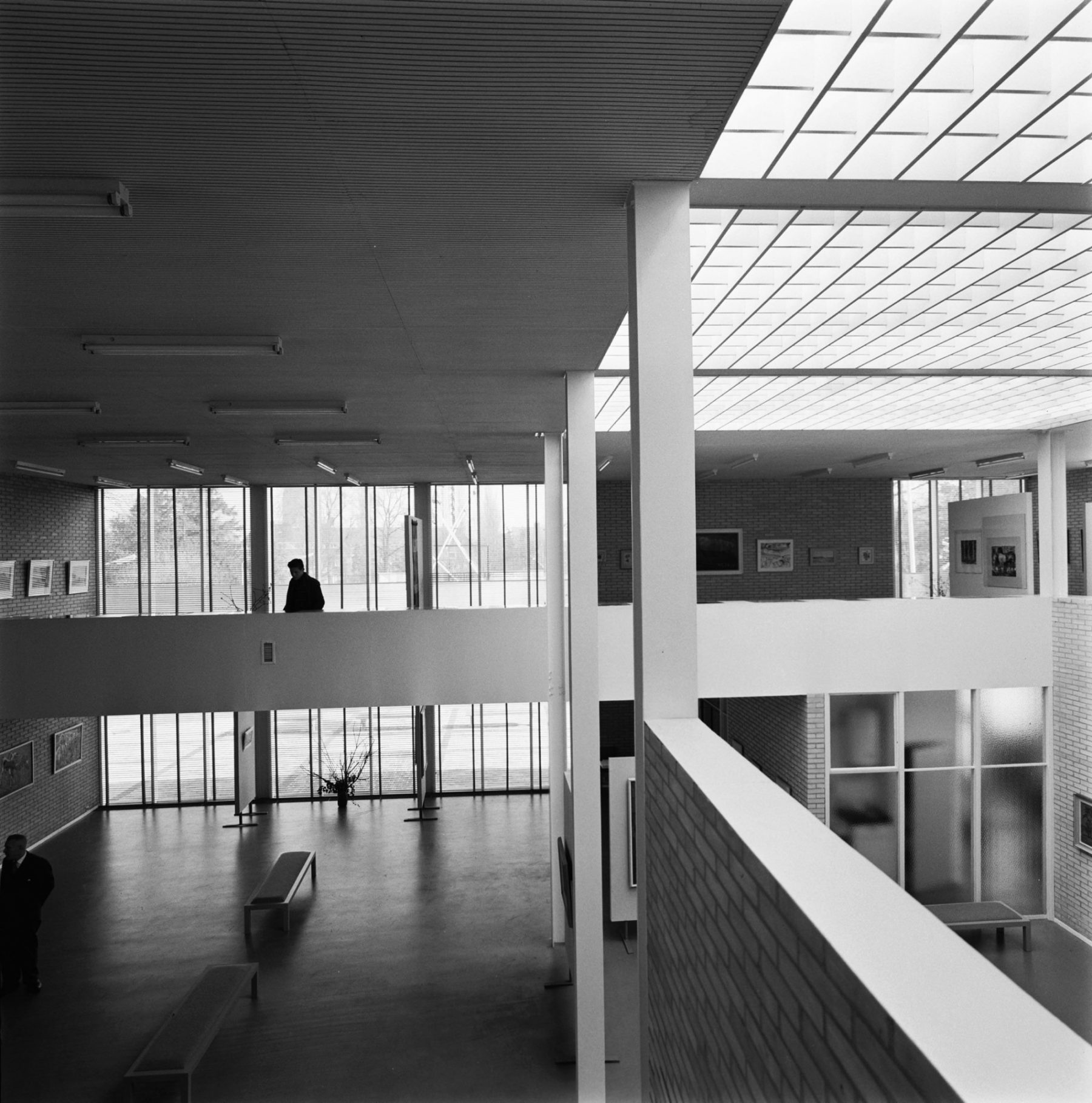 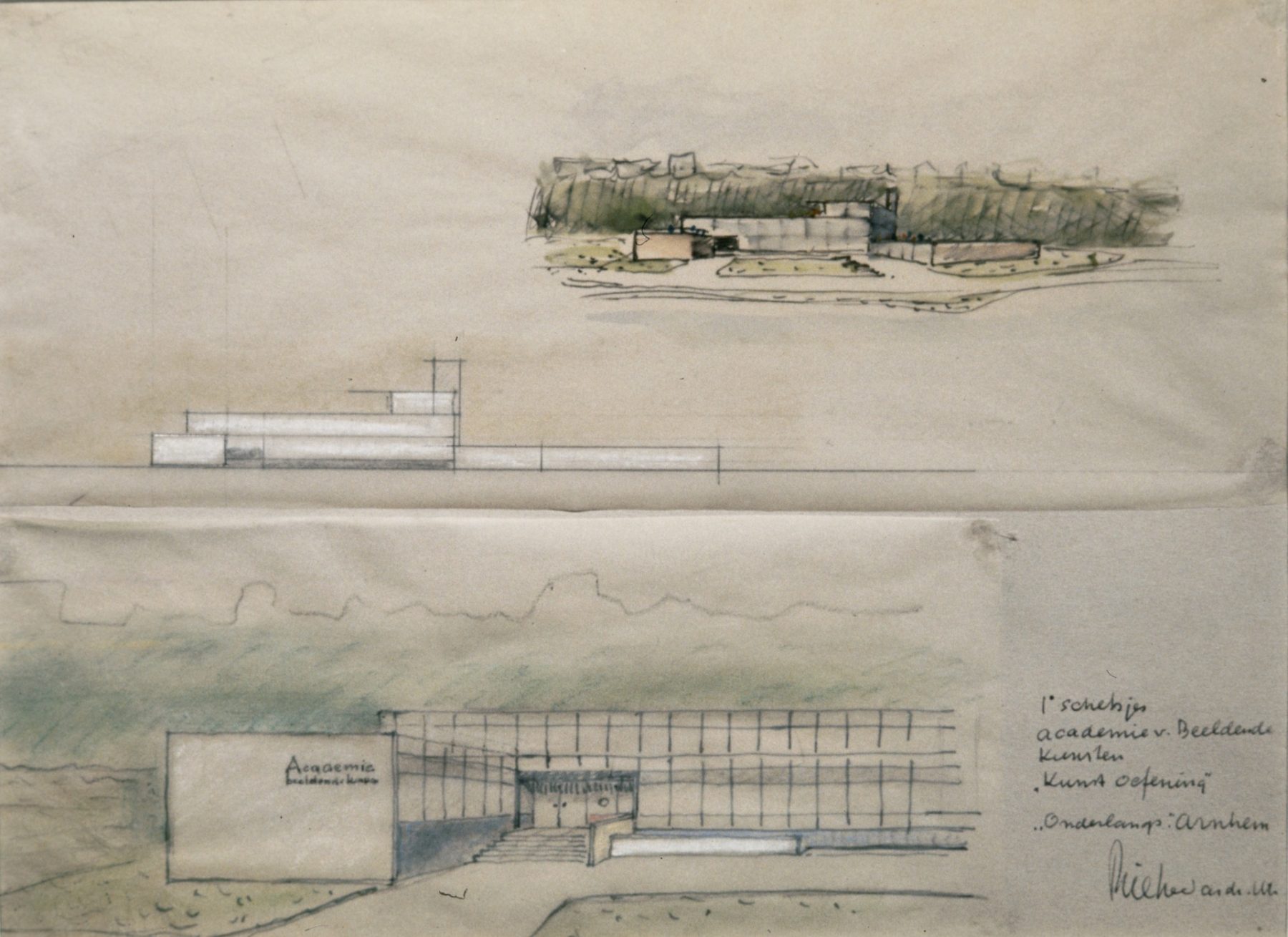 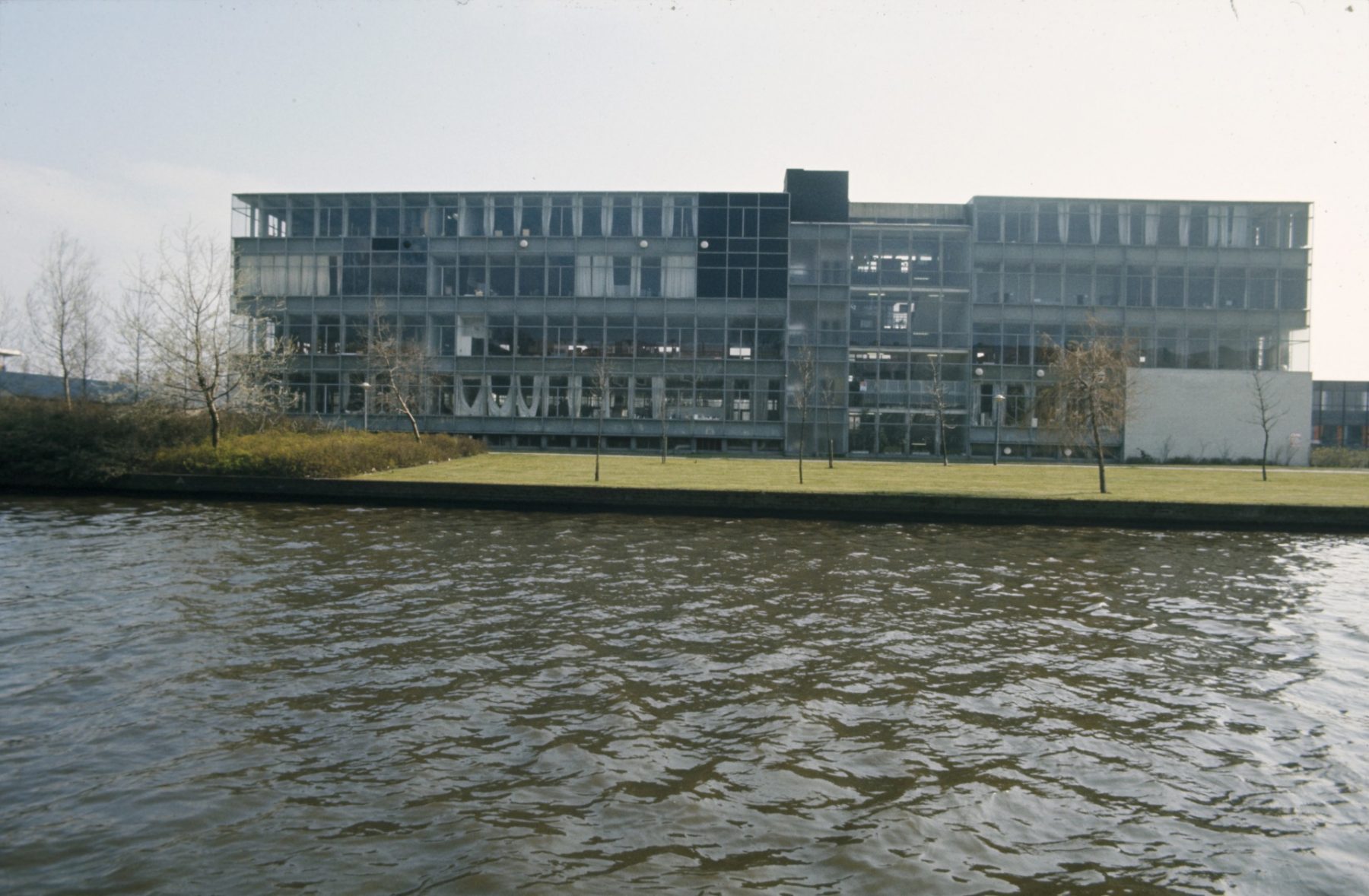 The design process in Amsterdam was complicated and lengthy, due to the lack of financial resources and the search for a suitable location. Rietveld was also looking for the right scale for a building with so many requirements for various functions. He wrote about this: ‘A well-considered room plan that fits some floor space into a construction plan; i.e. economic column distances and dimensions of the rooms have led to the same unit of measurement. Such a unit of measurement, which can also be applied vertically, gives a building sensible and calm proportions with mathematical purity. A well implemented unit of measurement is also conducive to the use of factory manufactured building elements.’ And in 1957: ‘The main construction is conceived in concrete; a middle construction collapsed on site as a backbone, with a concrete floor supporting the construction on two sides against it. The whole is protected by a glass shell.’

In the meantime Rietveld also worked on the design for the academy in Arnhem, for which he received the building commission in 1957. He wrote about this: ‘We designed the school in Arnhem as a variation to the school in Amsterdam, in order to take advantage of the larger amount of equal window and prefab concrete elements. Coincidentally, the preparation in Arnhem went more smoothly, causing the construction in Amsterdam to be realised sooner in Arnhem.’

The construction of the art academy in Arnhem began in mid 1961 and was completed in the summer of 1963.

The construction of the art academy in Amsterdam had only just begun when Rietveld passed away on June 25, 1964. In 1967 the building was inaugurated and as a tribute to the designer the name of the institute was changed to ‘Gerrit Rietveld Academie’. 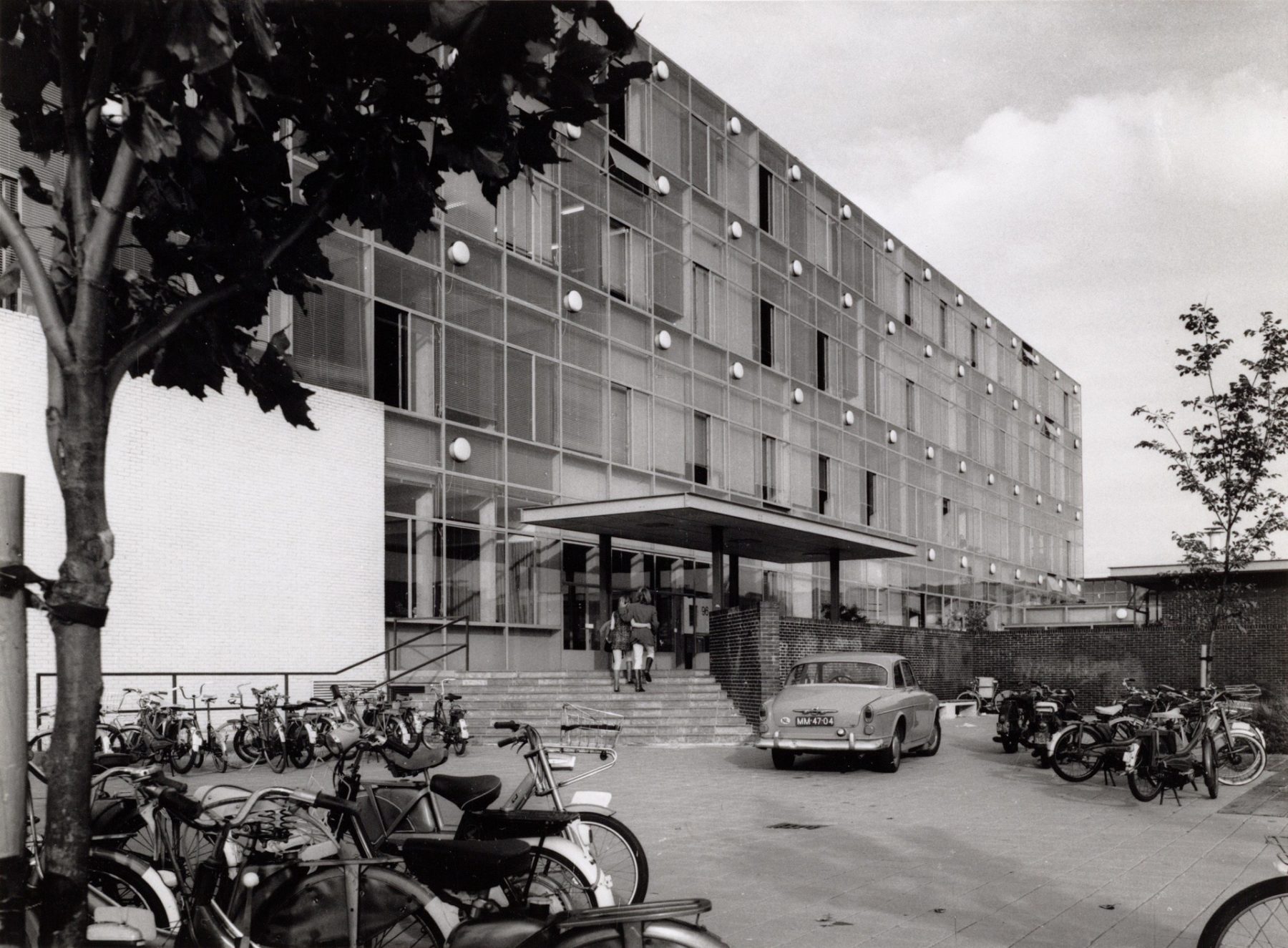 The partnership Rietveld, van Dillen and van Tricht was founded on 1 January 1961. Joan van Dillen and Johan van Tricht, employees of Bureau Rietveld for many years, joined forces with Gerrit Rietveld to guarantee the continuity of the firm. Rietveld was now 72 years old. 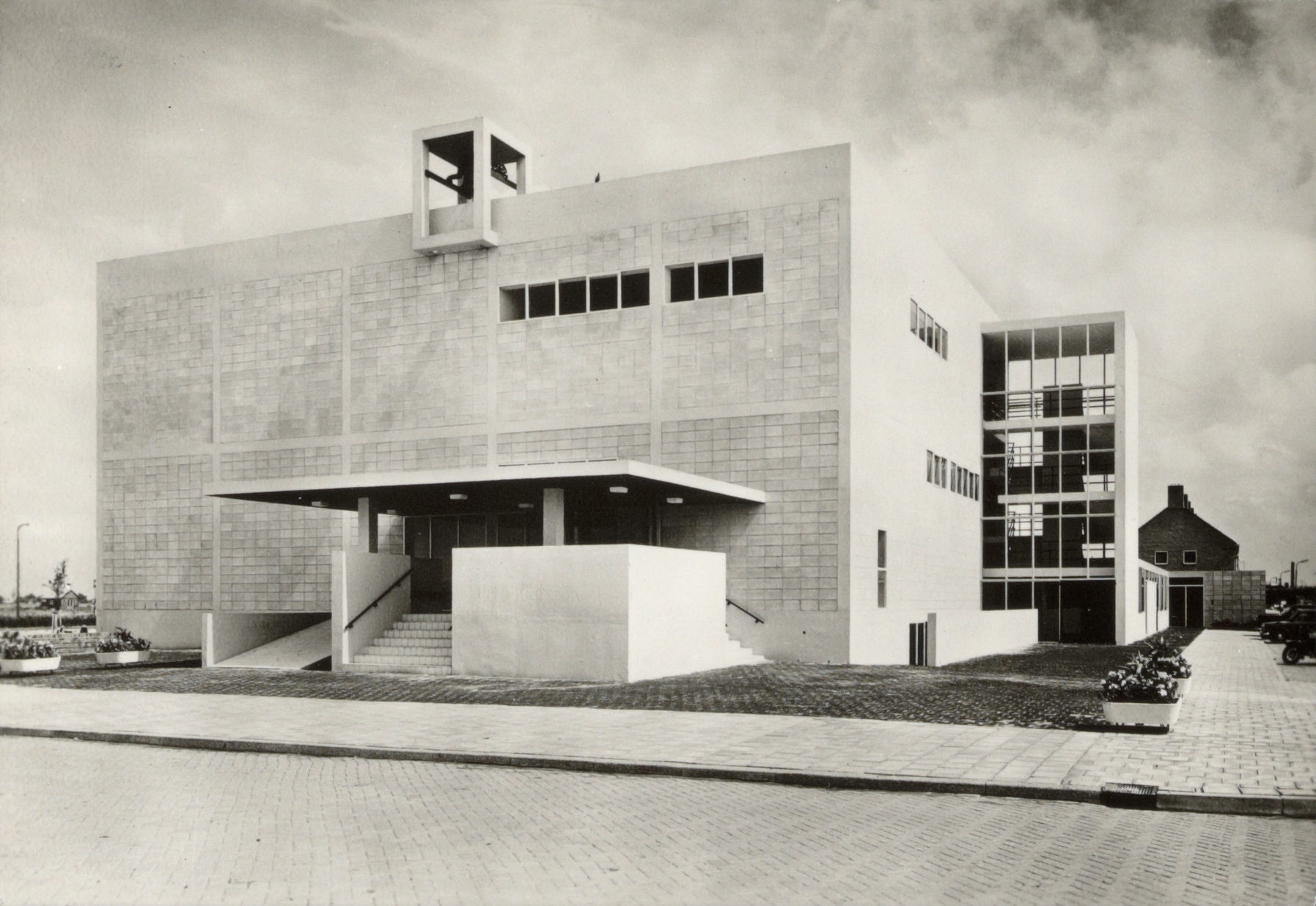 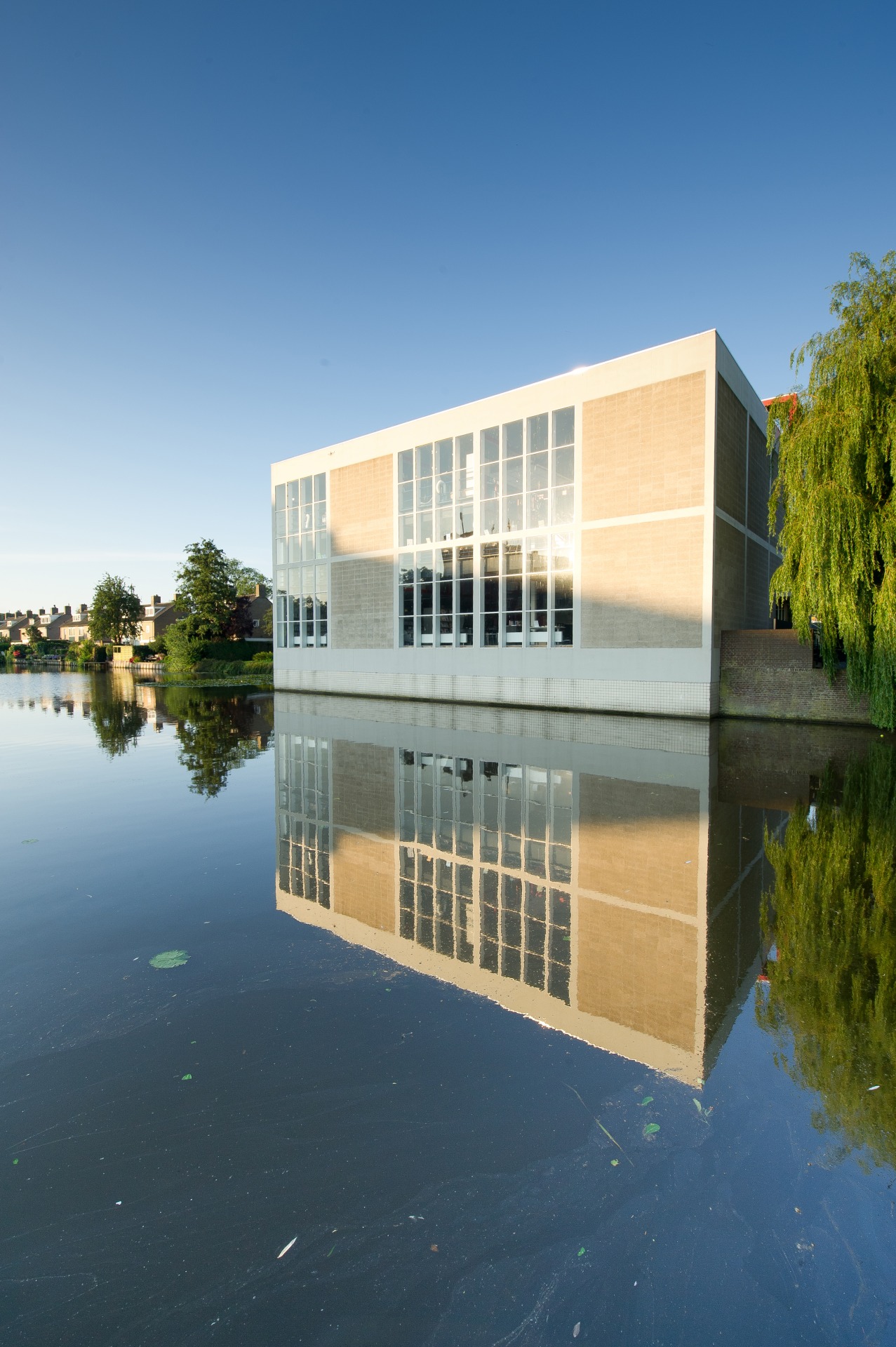 Rietveld accepted the commission to build the church on the condition that it would also serve other social purposes. Next to the church hall there was also a theatre, a foyer, a meeting room and a nursery.

The building is half of a cube, which together with the reflection in the water at the rear facade becomes a whole cube. For the interior of the church hall Rietveld designed the benches, a red granite, cylindrical baptismal font, a pulpit, a communion table and a chair for the reverend.

The building for the Vrije Gemeente of Amsterdam (1964-1967) was finally realised by J. van Tricht. Just before his death Gerrit Rietveld had worked out the design of this church building in detail. Like the one in Uithoorn, the space had to be suitable for music and theatre performances and there had to be smaller spaces for all kinds of socio-cultural activities, such as a nursery, a library, a youth room and various meeting and conference rooms. 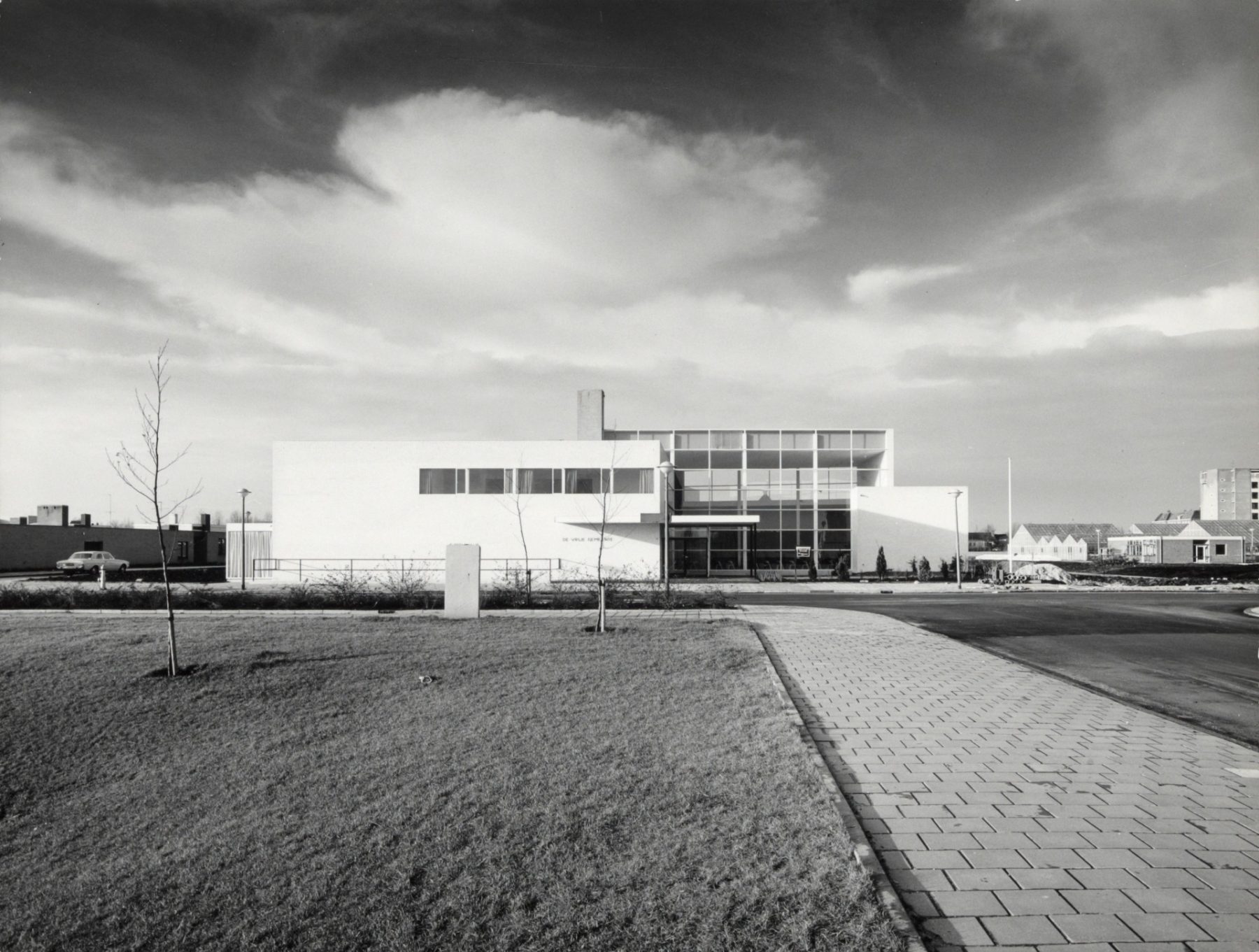 Rietveld set to work, so that when he passed away in June 1964, a number of sketches and facade designs showed that the main layout and the final facade image didn’t need to be altered too much. This resulted in a characteristic Rietveld design of interlocking rectangular volumes of different sizes and heights and adding flat roofs. The building is bright and light, with open ground planes and shows a convincing spatial effect. Furthermore, there are dense facade surfaces in white glazed bricks and, above all, lots of glass in tight, thin steel frames.

In December 1967 the Vrije Gemeente officially moved into the building, also known as the Pavilion Buitenveldert. 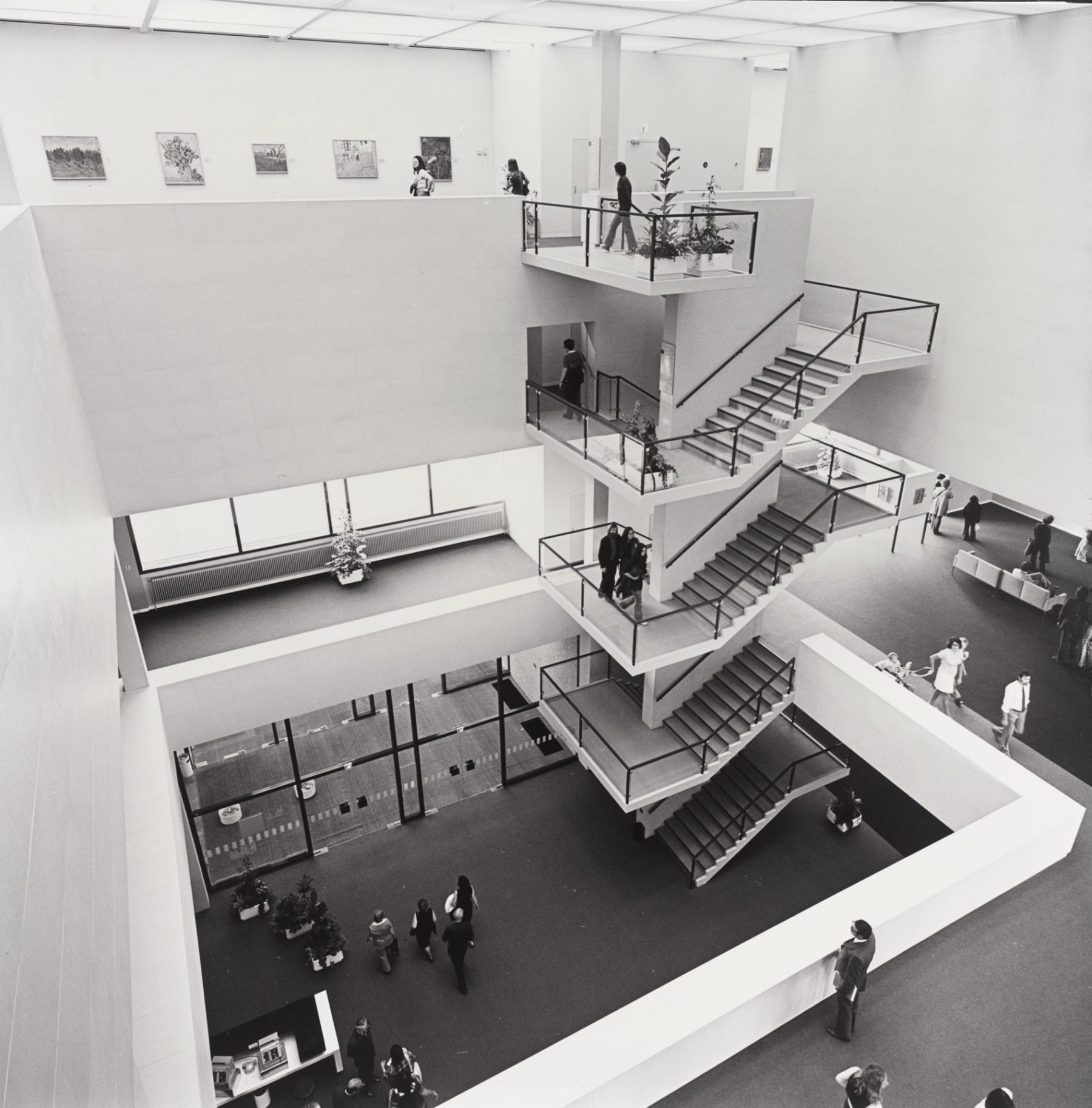 Gerrit Rietveld was commissioned by the State of the Netherlands to build the museum. The initiative was taken by Vincent van Gogh’s nephew, the son of his brother Theo. The building has three floors, the exhibition space is illuminated from above. At the top of the mezzanine, which is as high as the building, daylight enters through the 36 square skylights. This indirectly provides sufficient light for the surrounding galleries. The Van Gogh Museum was the last design by Gerrit Rietveld. He passed away just after he had finished the first sketches. The design was worked out according to these sketches by the partners of his office. The essential parts of it, such as the cube-shaped main volume, the entrance and the mezzanine with the stairs are designed by Rietveld. 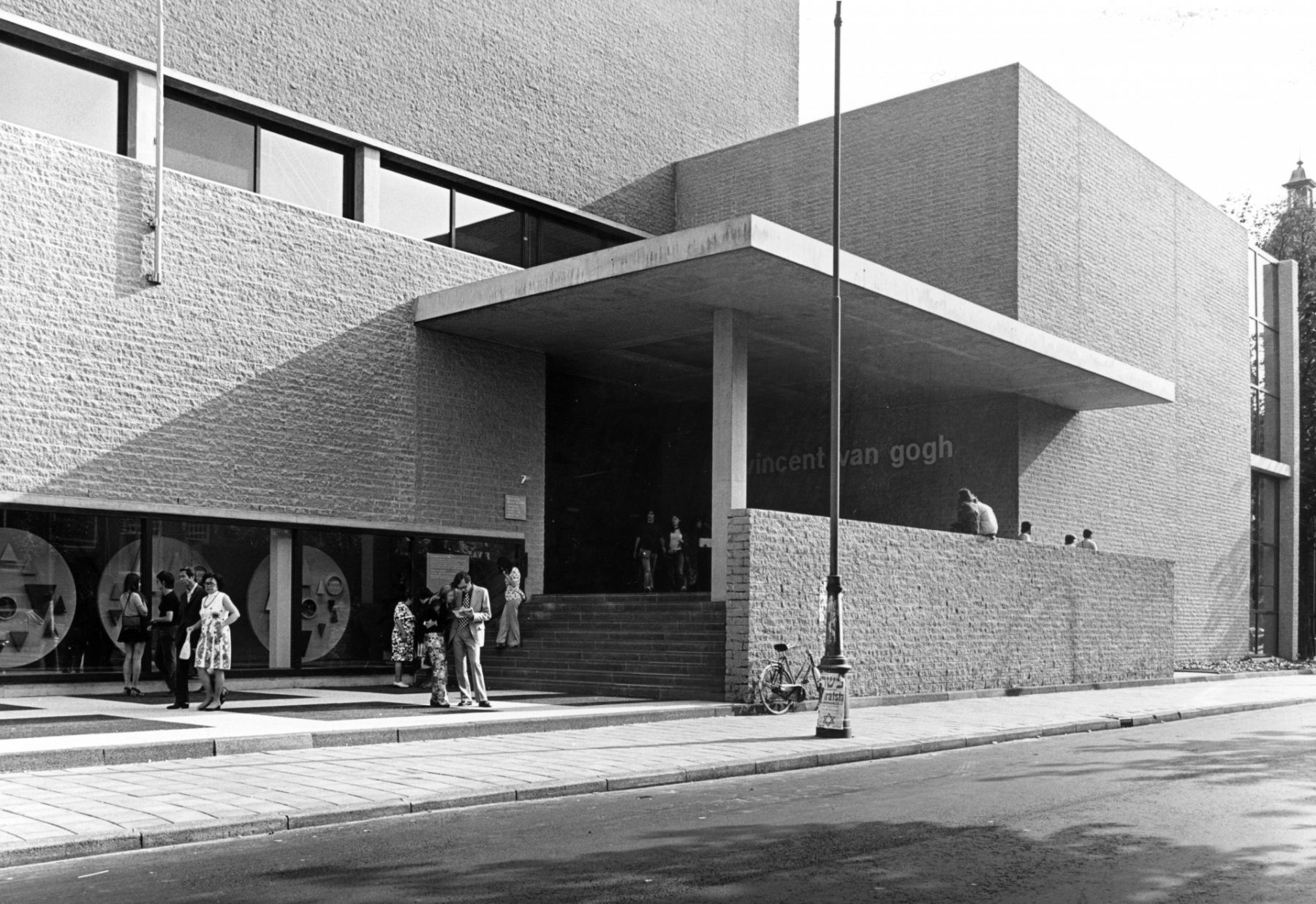 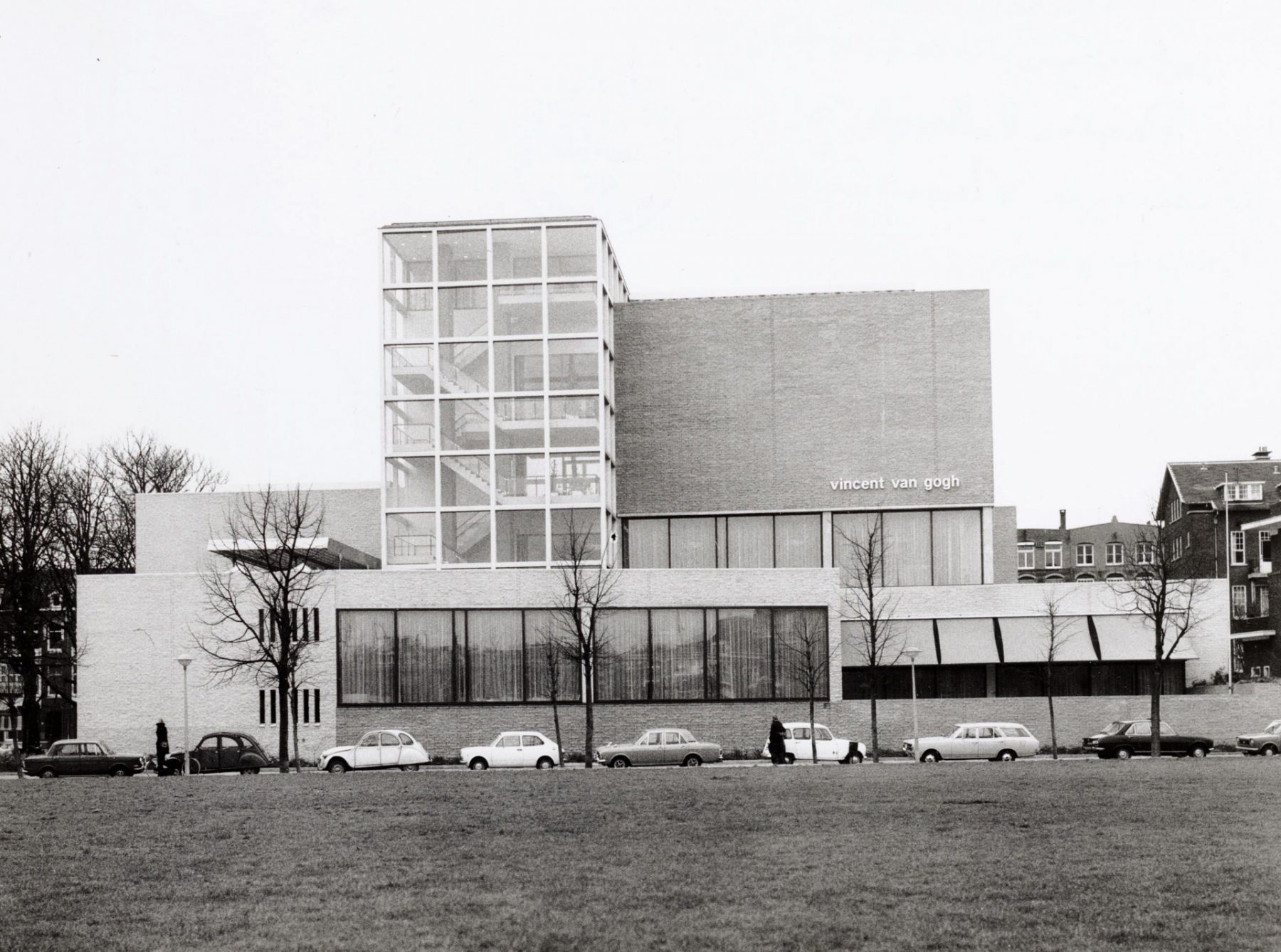 On the occasion of his 70th birthday in 1958 the magazine Forum dedicated an issue to Gerrit Rietveld with contributions of both national and international colleagues, such as Le Corbusier, Richard Neutra, Bruno Zevi, Alison and Peter Smithson, Alfred Roth, Jacobus J.P. Oud, Ben Merkelbach and Aldo van Eyck. Merkelbach wrote about Rietveld ‘…His open-mindedness goes hand in hand with an exceptional mastery of spatial design. Rietveld’s place as an architect in the Netherlands is not nearly as important as his place as an architect in the world.’