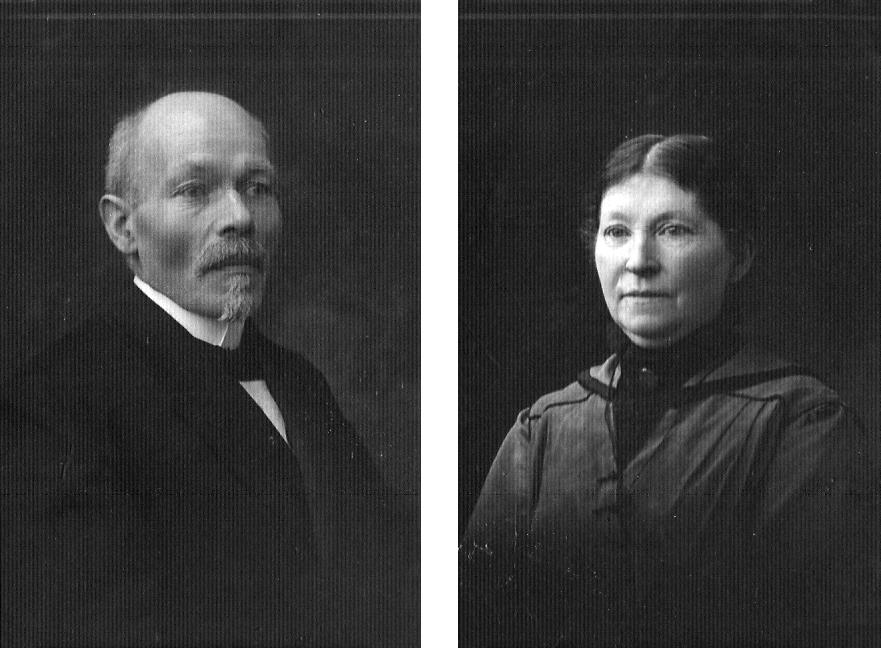 Gerrit Rietveld expressed: “From very early on I was aware of the relativity of everything we perceive, appreciate and value. What my mother thought was the best and most beautiful thing in life, my father thought was bad and sinful. We were brought up with the duty to do good and disregard evil, everything material was low and bad and the spiritual was high and good.”

In 1900, when he was 11 years old, he became an apprentice to his father in the furniture workshop.

From 1904 he followed evening courses at ‘Het Kunstindustrieel Onderwijs der Vereeniging the Utrechtsch Museum van Kunstnijverheid in Utrecht’. There he received lessons in drawing, painting, modelling, technical drawing and theory of style and ornamentation. One of his teachers was P.J. Houtzagers, at that time a famous architect in Utrecht. In the years 1904-1908 he followed evening courses in art-industrial education and during the day he worked in the goldsmith’s workshop of the jeweller C.J.A. Begeer.

In the period 1909-1913 he was employed there and designed showrooms in the Baroque and Rococo styles of Louis XIV and XV. After that he worked in the studio of this firm as a designer of silverware, medals, jewellery, enamels, etc. Erich Wichmann and Jan Eisenloeffel also worked there. Both played an important role in the avant-garde of the visual and applied arts.

At that time he also followed an evening course with architect P.J.C. Klaarhamer. This especially inspired Rietveld towards his furniture designs.

Willem, Gerrit’s two-year younger brother, studied classical languages at the University of Utrecht and also took classes in philosophy. It goes without saying that Gerrit became acquainted with the work of Spinoza, Kant, Hegel, Schopenhauer and Nietzsche during their conversations. 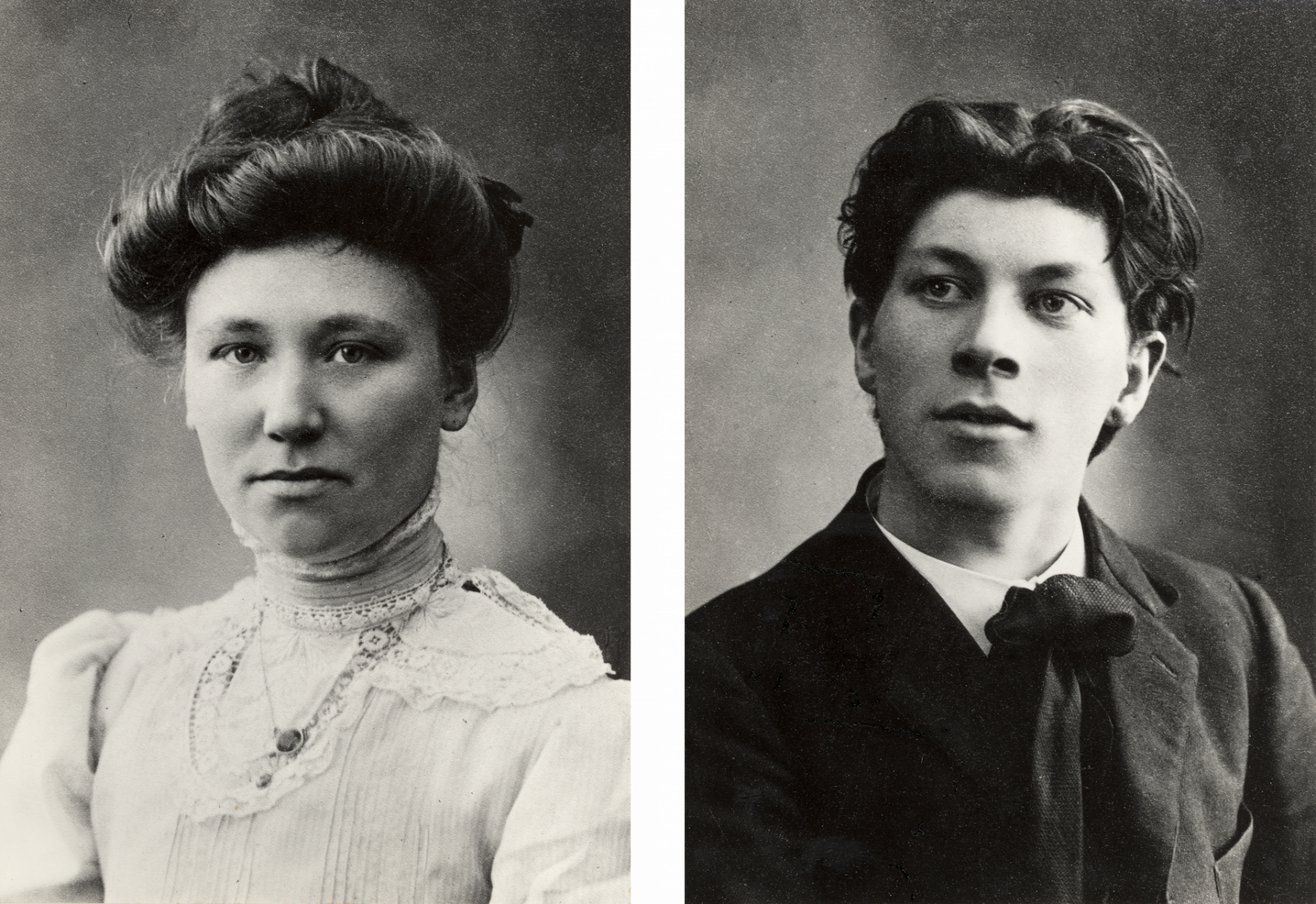 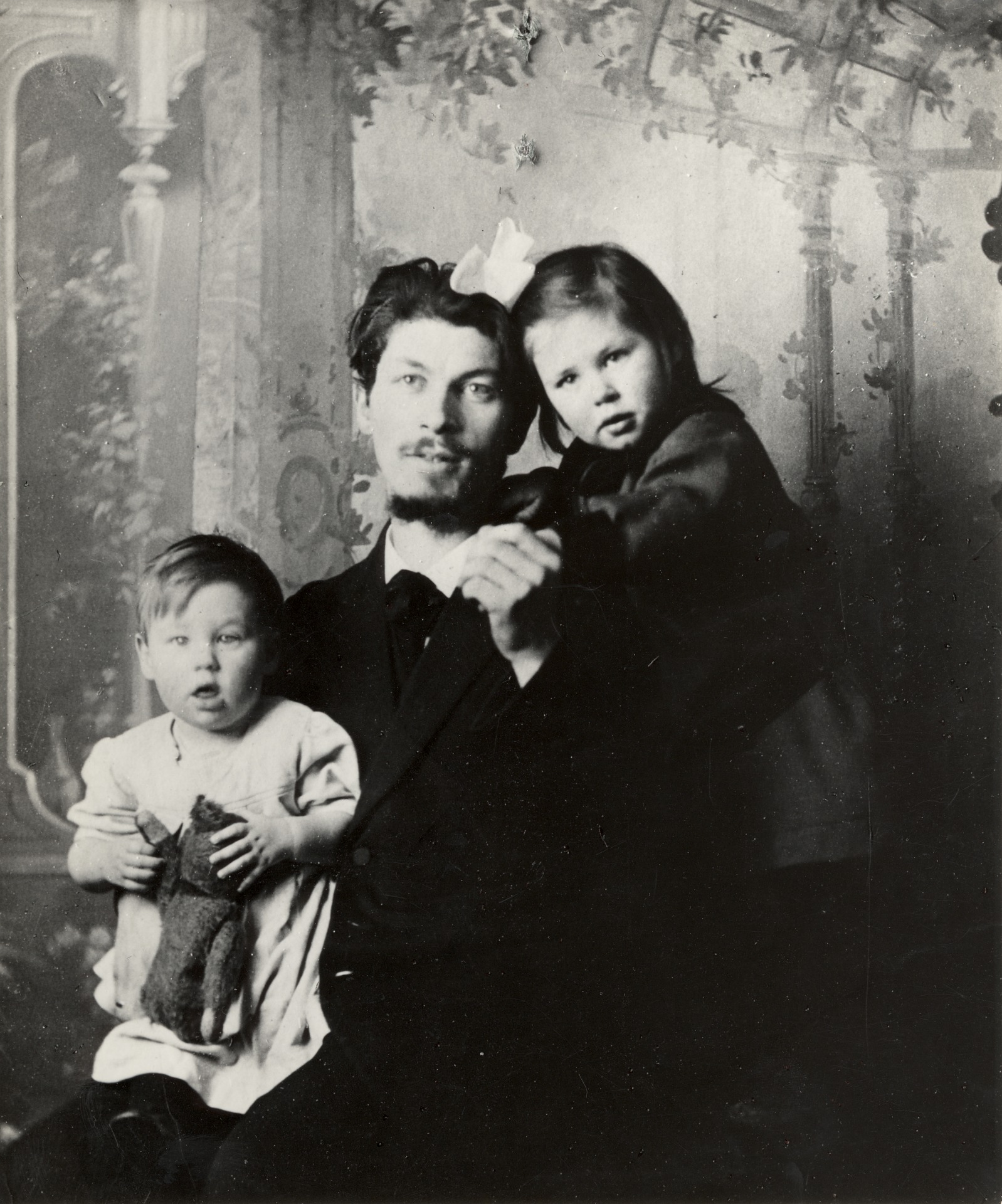 From 1912 Rietveld was a member of the Utrecht Society for Visual Artists, the ‘Schilder- en teekenkundig genootschap Kunstliefde’. Later he also became a member of the progressive company ‘Voor de Kunst’. At this company he probably also met Charley Toorop, when she exhibited there in 1915.

Rietveld opened his own furniture workshop on the Adriaen van Ostadelaan in 1917. 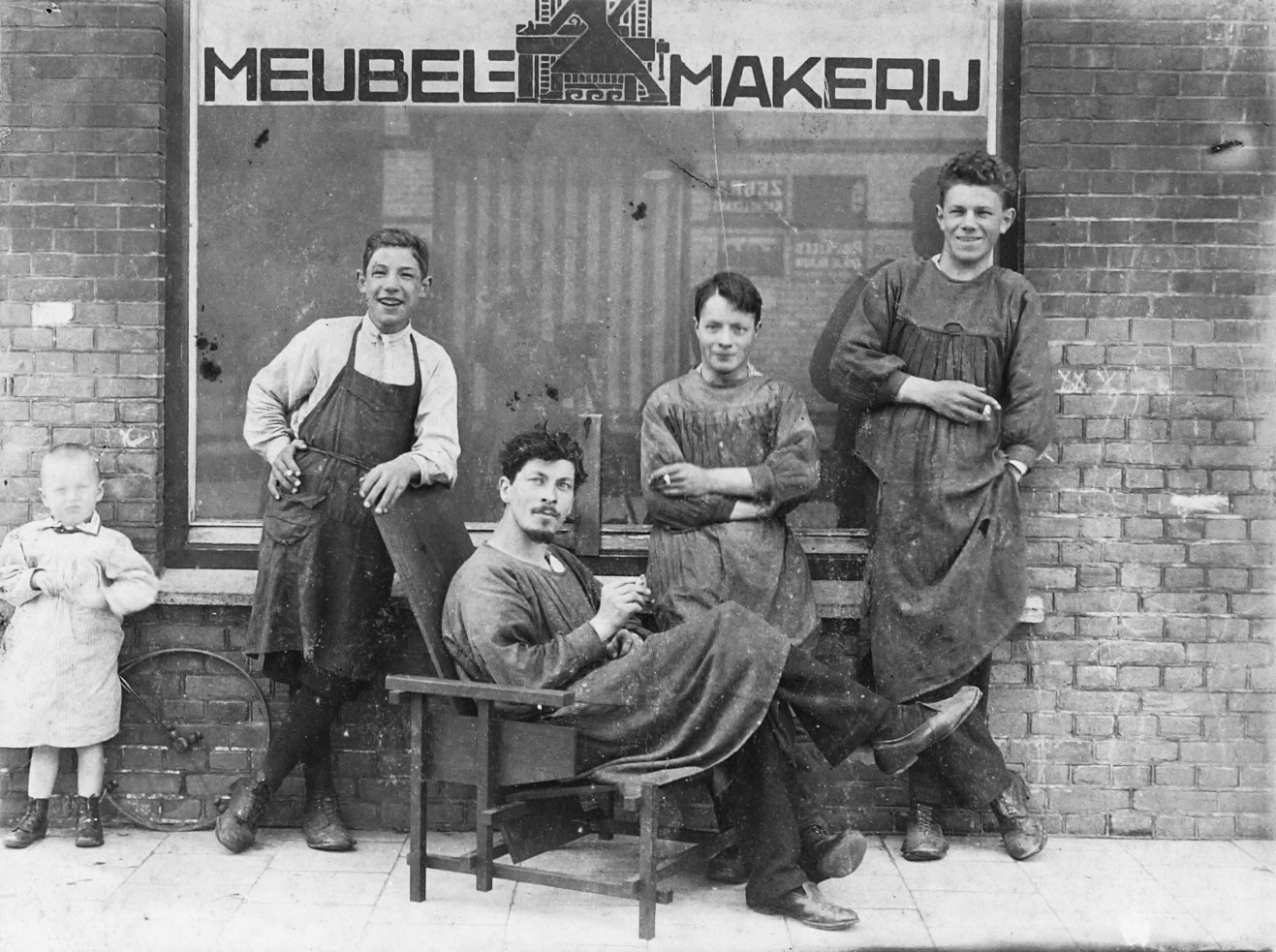 He became friends with one of his clients, the architect H.G.J. Schelling, who brought him into contact with the work of the writer and philosopher Tagore. In doing so Gerrit became detached from religion. He tried in vain to involve his wife in his development. Vrouwgien remained faithful to her faith until the end of her life and read passages of the Bible almost daily.

At the beginning of 1919 Gerrit came into contact with members of De Stijl group through the architect Robert van ‘t Hoff, including Theo van Doesburg, Bart van der Leck, J.J.P. Oud and Jan Wils. Rietveld’s design of the ‘red-blue chair’, which was still stained brown at the time, had caught their attention and he became a collaborator of the magazine ‘De Stijl’.

In 1920 Rietveld designed the interior of a model home in a housing block of the architect J.J.P. Oud in Spangen, Rotterdam. In the following years he designed and carried out renovations, designed exhibitions and store fronts. He became acquainted with Bruno Taut, Kurt Schwitters and El Lissitzky.

He handed over the furniture workshop to Gerard van de Groenekan in 1924. In 1925 he settled himself as an architect in the newly built Rietveld Schröder house on the Prins Hendriklaan in Utrecht. This was the first house Rietveld designed, commissioned by Mrs. Schröder. It attracted immediate international attention.

Initially he received few architectural commissions and Rietveld continued to design and organise exhibitions in the Netherlands, but also abroad, such as in Moscow and Stuttgart.

He made a number of designs together with Truus Schröder. She also supported him financially in those years; they probably had a relationship from the beginning of the twenties until the end of their lives. This was never mentioned publicly, but it was an open secret. Vrouwgien had no appreciation whatsoever for her husband’s work. Moreover, she was sickly and, partly due to circumstances, unhappy. Gerrit continued to come home every day, so that nothing changed for the outside world due to his relationship with Truus.

In 1928 Rietveld was one of the founders of CIAM (Congrès Internationaux d’Architecture Moderne) and in 1929, together with Mart Stam, he formed the Dutch delegation to CIAM ‘Die Wohnung für das Existenzminimum’ in Frankfurt am Main.

In 1933 the architectural firm moved to the Oudegracht 55 in Utrecht.

During the 1930s Rietveld mainly received commissions to design houses for friends, acquaintances, artists and intellectuals. At the end of the decade the number of commissions decreased, partly due to poor economic times.

In 1936 he converted the Vreeburg cinema in Utrecht and built an apartment on top of it for his family. It was one large room with only curtains as screens for the bedrooms.

At the beginning of the war he built two more houses, the summer house Verrijn Stuart in Breukelen and the house Nijland in Bilthoven. 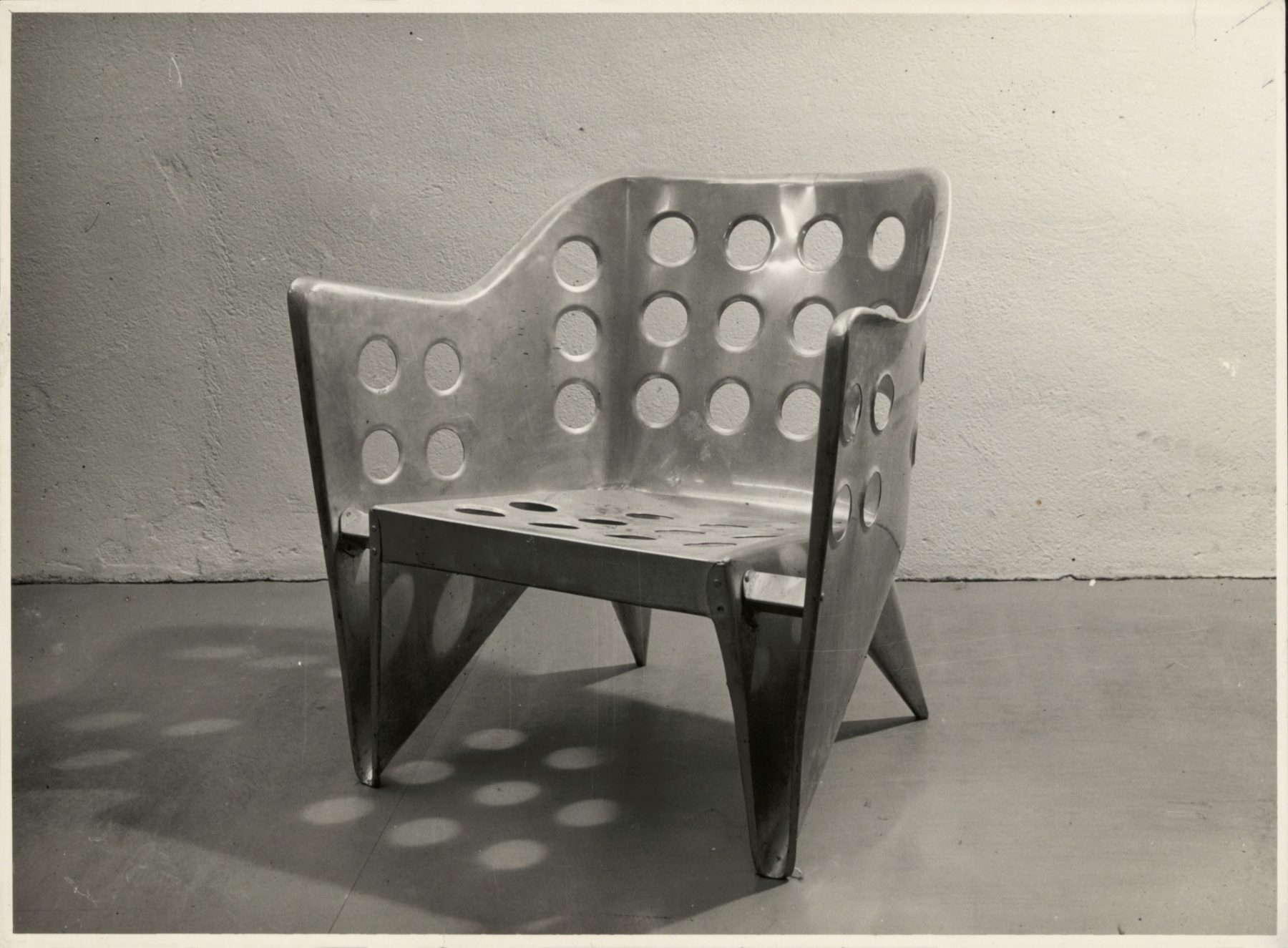 At the end of 1941 the Dutch Culture Chamber was established by the occupying forces. Gerrit refused to report himself, which resulted in the fact that he was unable to continue working as an architect. At a certain moment he was also wanted by the Germans for illegal activities. He manufactured false identity cards. He travelled around in Limburg where he made drawings of castles and farms. He also went into hiding for some time with his friend the general practitioner/photographer Nico Jesse in Ameide (South Holland). In the same period he designed several pieces of furniture. Like the one-piece aluminum chair, a prototype for mechanical production in vulcanised fiber or other materials. Industrial production of the design unfortunately has yet to take place.

Meanwhile, Rietveld’s son Jan tried to flee to England, but was captured in France and was brought over to a concentration camp. His son Gerrit jr. was locked up in camp Vught and youngest son Wim in camp Amersfoort. The eldest daughter Elisabeth (Bep) had emigrated to the Dutch East Indies in 1937. She lived in Batavia and from 1943 she and her three children stayed in various Japanese internment camps. All children and other family members survived the war.

After the war, Gerrit Rietveld had to make a living through exhibition design and teaching for several years. It wasn’t until the 1950s that he started receiving architectural commissions again.

An appointment as director of the Institute for Arts and Crafts Education in Amsterdam, the later Rietveld Academie, did not go ahead. Willem Sandberg, who was then the director of the Stedelijk Museum in Amsterdam and was a delegate from the municipality within the school board, thought he was the best candidate. A letter of recommendation supported by 26 prominent Dutch people had no effect. The minister refused to appoint him, probably because of his communist sympathies. A lack of authority was indicated as an official reason.

In 1948 Rietveld was commissioned together with  Aldo van Eyck, Mart Stam and Cornelis van Eesteren, among others, to draw up an urban development plan for the village of Nagele in the Noordoostpolder. The first plan was received positively in 1949. This was partly based on the relationship between the individual and the community that Rietveld raised and his proposal to allow both worlds to permeate each other. He was hardly involved in the second phase. He did, however, design a social housing project there, together with his son Jan. 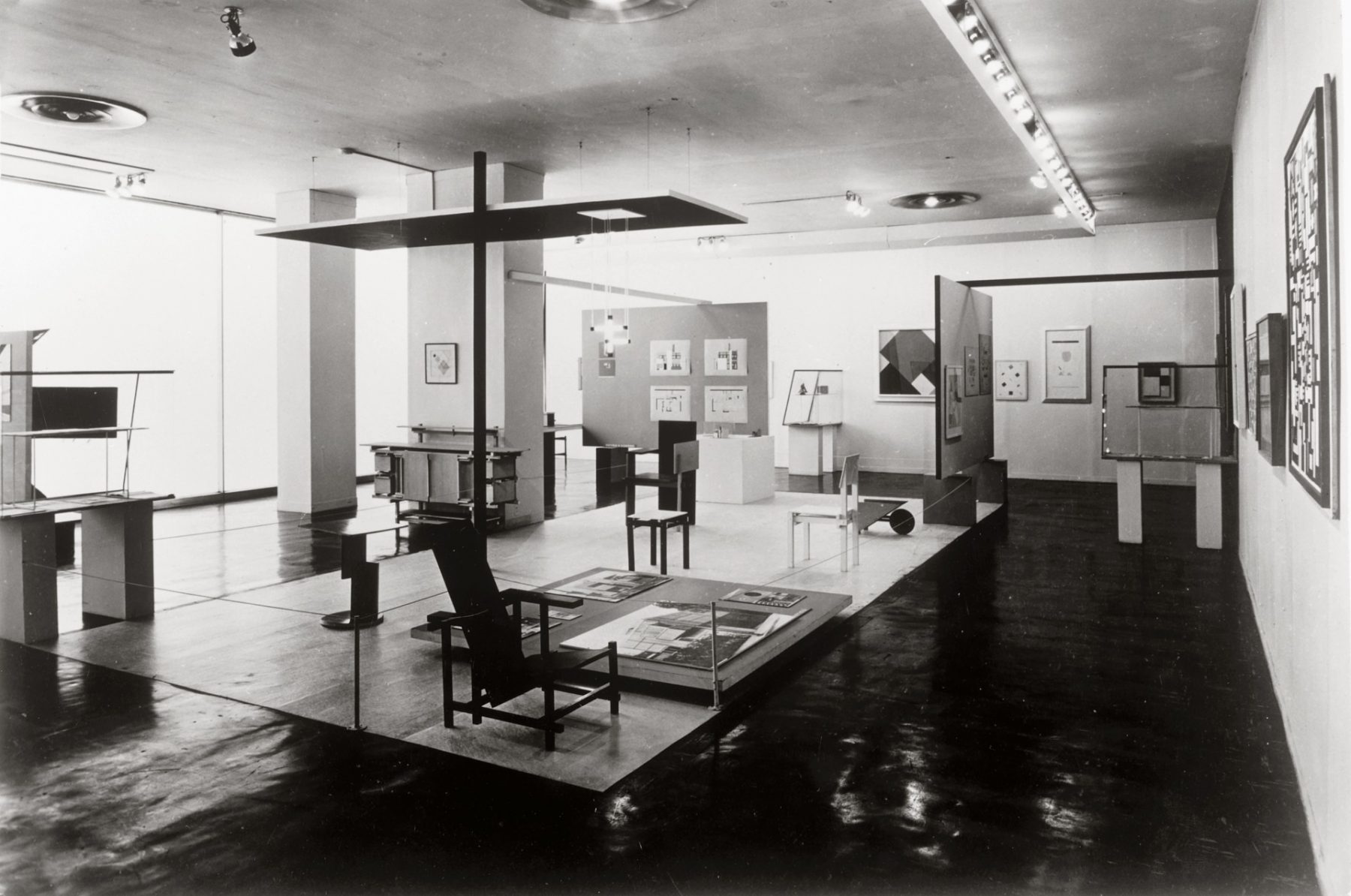 De Stijl exhibition of 1951 at the Stedelijk Museum in Amsterdam was co-designed by Rietveld. The exhibition was also shown during the 1952 Venice Biennale and in New York at the MOMA. Besides the paintings of Piet Mondriaan, Bart van der Leck and Theo van Doesburg there were photographs of the architecture of J.J.P. Oud and watercolours of the facades of the Schröder house. Also on display were the red-blue chair, the buffet from 1919, the Berlin chair, the military chair, military stool and the tube lamp.

Rietveld then received several commissions from The State of The Netherlands: the design of the Dutch Pavilion for the Venice Biennale, the press room in the main Unesco building in Paris and the design for the pedestal of Foucault’s pendulum in the United Nations building in New York.

He designed a total of more than 100 residential houses, three social housing projects and a dozen larger buildings, including the Juliana Hall in Utrecht, Weverij de Ploeg in Bergeijk, the art academies in Arnhem and Amsterdam and the Van Gogh Museum in Amsterdam. He continued to design furniture throughout his life, more than 350 items in total. 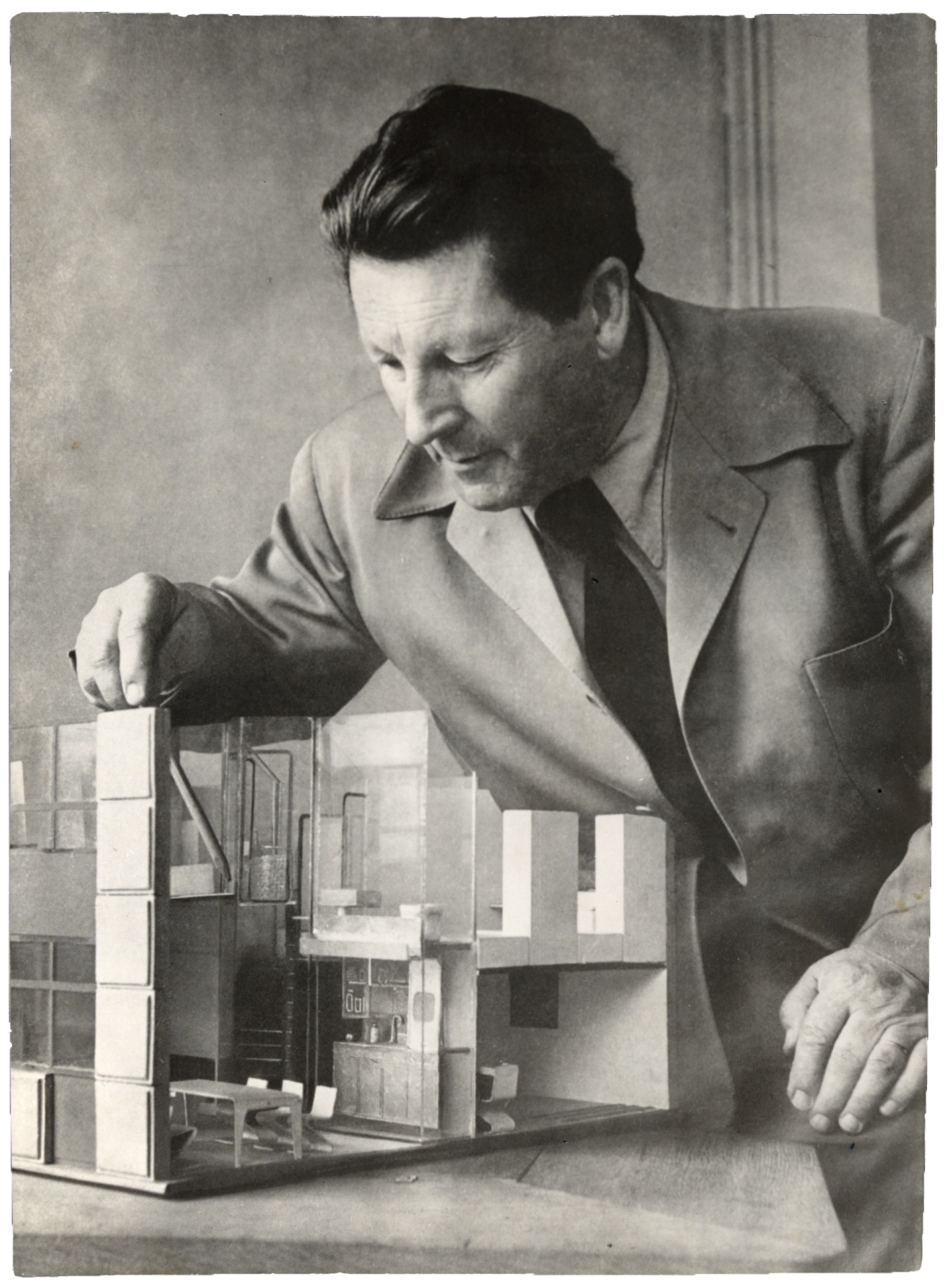 From 1950 to 1954 he taught Practical Aesthetics and Design at the Academy of Visual Arts in ’s-Gravenhage.

The partnership Rietveld, Van Dillen and Van Tricht was founded in 1961.

At the beginning of 1964 Gerrit Rietveld was awarded an honorary doctorate by the Delft University of Technology. Shortly afterwards the Association of Dutch Architects appointed him as an honorary member.

Rietveld continued to live in Utrecht throughout his life. After the death of his wife in 1957 he moved in with Truus Schröder in the house he had designed for her.

On June 25, 1964 he passed away in the Rietveld Schröder House in Utrecht, one day after his 76th birthday.